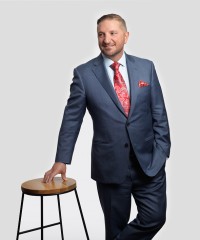 When Robert showed up for his articling interview at McLeod Law, partner Robin Lokhorst informed him they were done hiring and meeting him only as a favour to Robert’s referrer. But then Robin asked, “Why should we hire you?”

Before he answered, Robert recalled his father. The owner of a trucking business, he taught Robert to always ensure your customer is making more money than what they’re paying you. Like father, like son, Robert responded, “I will simply endeavour to make you more than you’re paying me.” He has made good on that promise ever since.

As head of McLeod’s Business Law group, Robert often draws on his experience working in the family business since he was 14. “I relate to my clients because I’ve been there,” he says. Robert also understands the importance of client service. “My clients want me to care for them and take care of them. I work hard to do that.”

In his volunteer work, Robert supports communities that have supported him. A long-time fan of Fernie’s Demolition Derby, he built and entered his own car. In the two years Robert raced it, he raised $8,000, which he directed towards a scholarship he started at his high school, a hospital and a nature alliance. When his wife was diagnosed with cancer, he did the Ride to Conquer Cancer, raising $17,000 in a month. (And, happily, she has since recovered.)

An avid foodie, Robert counts some of Canada’s top restaurants as clients. He expresses that interest in his personal life, where his specialty is sous vide and making “something tasty” from things he pulls from the fridge.