Dear Justice Minister: We are in a Crisis. And we are Here to Help.

Five leaders in the legal industry, including McLeod Law's Jackie Halpern, QC, have co-authored an article where they share the hard truths about the current state of Alberta's justice system. They plead with the Justice Minister to consult key stakeholders before continuing to make major structural changes and budget cuts that will cripple how our legal system meets the most basic needs of Albertans.

The issue is about Albertans – the few lucky ones who can afford to pay a lawyer and the much larger number of self-represented litigants who can’t.

By cutting funding to core services and programs in the fall of 2019, including the $5 million cut to Legal Aid Alberta without any prior consultation with its board of directors, has lead to unintended consequences that will ultimately cost more than it saves. Every dollar spent up-front on legal aid saves more than $6 in consequential spending later. Providing people with access to legal services significantly reduces the $800 million that this government will spend a year on health care or social assistance for people whose unmet legal needs have snowballed into other, more serious, issues.

The concern is that the government is making decisions that affect all Albertans’ access to justice without meaningfully consulting either the legal profession or the public.

You can read the full article in the Canadian Bar Association's Law Matters magazine. 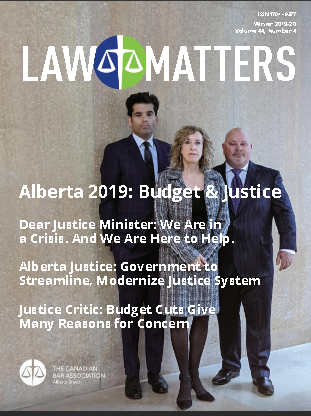